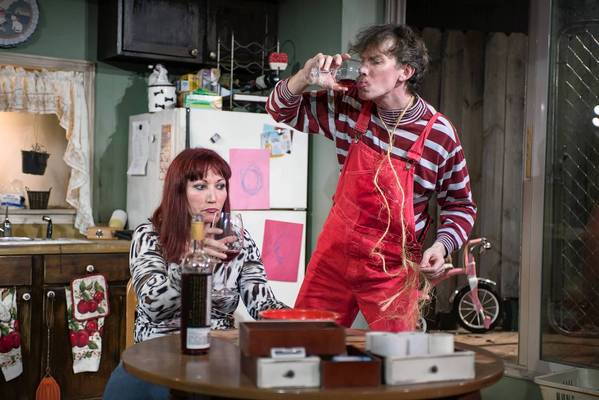 ‘Trevor’ at A Red Orchid Theatre

With any form of art, it’s easy to get burned out by a stream of mediocrity. My former roommate and I had been on a mission to watch theater every week, and we went on a solid five week streak of shows that we could barely sit though. It was enough to make us question if we really liked theater as much as we remembered. In fact, it had been years since I’d seen a theater show that made me consider a standing ovation. It was especially dispiriting for this to occur in Chicago, a city long renown for its vibrant theater scene.

‘Trevor’ finally broke the dry spell. A new play from an incredibly talented playwright currently writing for Orange is the New Black, it’s based on the story of the woman who had a pet monkey who ripped her face off. If this were Law and Order, the ad would say it was ripped from the headlines. Trevor manages to use this depressing story as a jumping off point for a wacky and surprisingly poignant portrait of a woman, her overgrown primate, their love for each other, and their complete, utter inability to communicate.

Before we get much father, it’s important to note that the monkey is played by an actor who communicates the fact that he’s a primate exclusively through physicality. No worries, you won’t have to sit through a guy running around in a gorilla suit. The playwright and actors pull off a beautiful move that would only be possible in theater: the monkey is obsessed with getting back into show business, and what humans perceive as his primitive grunts is actually him begging for an updated resume. Miscommunication provides a steady stream of laughs, and ultimately the play’s pathos in its surprisingly heartbreaking final act.

It would be wrong of me to not mention the fantastic production that surrounded the writing. All the actors were top notch and the set design was detailed and perfect. Before the show even started I knew I was looking into a household that a desperate woman was trying to hold together, yet slowly and steadily failing to.

Trevor left me excited, and walking out of the show I began to wonder how I could mine the stories that float around our everyday life, the weird, the mundane, and morph it into a full fledged play. We’ve seen a thousand Odd Couples and Sound of Musics, and experimental theater that’s weird for the sake of being weird is exhausting. Ultimately, theater is about telling interesting stories. Tell me something new, take me somewhere I haven’t been before, and let me experience it from the safety of my seat.

Partnering up with Amazon, Polaroid Originals, eBay, and B&H allows me to keep this site going without annoying banner ads. Using the following links when buying anything costs you nothing and helps me out a ton. Thanks! Find cool stuff on Amazon

I’m a writer, photographer, business owner, avid reader, hard of hearing person, Skyline Chili enthusiast, filmmaker, and midwesterner. You can reach me at hello (at) danfinnen.com or on Twitter @danfinnen.

All content copyright 2011-2020 by Orvieto LLC. Please see disclaimers page for more information. This site uses affiliate links. If you use one of these links to purchase an item, this site may make a small commission. When sharing articles and photos from this site, please maintain credits and sources. I work hard to create this content, so please be respectful by crediting and sourcing. Thanks!